The prison system in the United States is split into two main operating groups: public and private. Public prisons hold the vast majority, roughly 92 percent of all people in state and federal prisons, while private prisons hold the remaining 8 percent.

Though private prisons hold significantly fewer inmates, they teem and bubble with controversy in the American political and human rights arenas.

The main difference between public and private prisons rests in who runs the facility and how (or if) revenue is generated by its operation. While public prisons are not for profit government-run facilities, private prisons are for-profit companies managed and operated by a US government-contracted third party. In the United States, 17 states exclusively use public prisons while 33 use both public and private. 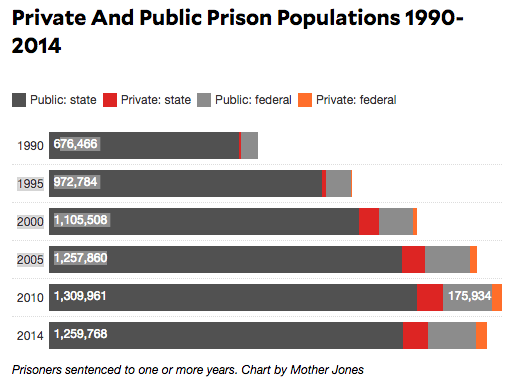 History of the Private Prison System in America

Private prisons have a long history in the United States, but they have garnered a great deal of attention in the past thirty years as a solution to the country’s high incarceration rates. According to the International Center for Prison Studies, the United States had the highest prison population rate in the world: 716 per 100,000 people. As a comparison, over half of the 222 countries listed in the World Prison Population List had rates below 150 per 100,000.

But it wasn’t until the 1980s that these facilities came into the limelight. Increased crime rates and the resulting “war on drugs” left American penal systems overloaded and prisons crowded. The private prison industry presented itself as a solution.

The argument was that the private facilities would provide business-like efficiency that would result in cost-savings for the American government. Additionally, many thought private prisons would assure a greater sense of accountability, as private companies could be fired or fined.

As a result, the 1980s saw a growth in the private prison system. The wave began with the Corrections Corporation of America in 1983 and was swiftly followed by the GEO Group, Inc., Management and Training Corporation (MTC), and Community Education Centers.

For those who defend the concept of privatizing prisons, the most often cited reason is cost savings. Some studies do reflect this viewpoint, such as one conducted by the Director of Health Policy Center at the Vanderbilt Institute for Public Policy Studies, James Blumenstein. His study reported that private prisons could save states up to $15 million a year. Additionally, the Bureau of Prisons says that private prisons cost an average of 17 dollars a day less per prisoner to operate.

But conflicting research prompts many to disagree.

However, taking a public temperature of the issue reveals that huge swaths of people are deeply disturbed by the privatization of the prison system. The concern is that private prisons are hubs of neglect, abuse, and substandard practices due to their private nature and profit-driven model.

Because private prisons receive funding based on how many prisoners they hold, many worry that they are incentivized to keep incarceration rates high and take in as many prisoners as possible. This is seen as an incentive not to rehabilitate prisoners and to profit from imprisonment.

Disapproval is fueled by studies such as the 1998 Department of Justice Investigation in Youngstown, Ohio. The study discovered that staff were physically abusing prisoners and the events were never reported. Due to their private nature, private prisons are not obligated to be as transparent as public prisons are, resulting in more confusion and suspicion from the general public.

The Debate Rages On

According to a Pew Research Center publication in April of this year, the number of people in private prisons has decreased since 2012. Despite this finding, there is no doubt that the private prison debate will continue to find itself in the spotlight as it affects thousands of Americans every year.

As always, if you or someone you know is accused of a crime and facing the possibility of incarceration, you should contact the experienced team at Jacqui Ford Law to act as your best defense.