The Oklahoma Highway Patrol has found a new way to increase the reach of civil asset forfeiture. Using a device called electronic recovery and access to data (ERAD) the OHP can swipe your debit cards and prepaid cards and seize all the money that is tied to those accounts.

As with other civil asset forfeiture cases, law enforcement can do this without finding evidence, filing charges, or officially arresting you. The only justification they need to take all the cash in your wallet and all the money in your checking account is a suspicion that your money is somehow connected to a crime.

OHP started using the ERAD last month, paying $5,000 for the scanners. The manufacturer of the scanner also gets 7.7% of all cash seized using the devices.

Lieutenant John Vincent of OHP defended this tactic in a recent interview.

“A lot of people are just going to focus on the seizing money, that’s a very small thing that’s happening right now. The largest part, the biggest benefit we have found is the identity theft. If you can prove you have a legitimate reason for having that money, it will be given back to you.”

While this new tool probably will help law enforcement stop a few cases of identity theft here and there, it’s also terrifying that anyone can have their bank accounts drained based solely on suspicion. 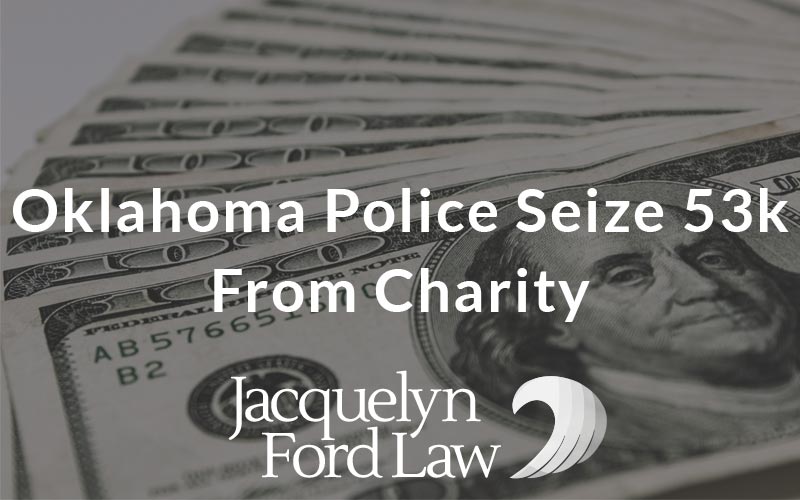 In yet another embarrassing and confusing case, civil asset forfeiture has struck again. Deputies in Muskogee pulled over Eh Wah for a broken tail light in late February. For some reason the

deputies on the scene decided they needed to search the car for drugs.

Side note – Wah is a refugee from Burma and has lived in the US for 10 years, and he has no drug related criminal history. He is the manager of a Christian rock band that throws benefit concerts to raise money for orphanages and schools in Southeast Asia.

When authorities searched Wah’s car, they didn’t find any drugs or drug paraphernalia. They did, however, find around $53,000 in cash. Some of the cash was Wah’s personal money, but most of it was from donations for schools and orphanages in Burma and Thailand the band had collected.

Wah, who is not a native english speaker, tried to explain where the money came from, but Sheriff wasn’t satisfied, citing “inconsistent stories.”  After six hours of custody Wah was release, but the money was seized.

This story caused a media firestorm and Wah was thankfully able to get legal help from the Institute for Justice.

Last Monday Wah went to court. Thanks to his legal team and support from the community, the DA dropped all charges and returned the money.

“I looked at the case and met with the officers, and determined that we would not be able to meet the burden of proof in the criminal case and in the civil case.” said Muskogee County District Attorney Orvil Loge.

Taking money from orphans is sad, but what’s sadder is that if this story didn’t get so much attention and Wah didn’t get legal help, the money would still be in the hands of the authorities. Stories like Wah’s aren’t rare, but the fact is that he got his money back is.

Far too often victims of civil asset forfeiture are helplessly lost. The burden of proof is placed on the owner to prove their innocence, which is hard to do without a lawyer.

The most erroneous part of this law is that once the money is seized, the owner is responsible for proving the money or property is not involved with criminal activity. To rein in abuses of this tool, the US Justice Department recently announced they are suspending a small but important part of civil asset forfeiture.

Equitable-sharing allows police to prosecute asset forfeiture cases under federal law instead of state law. This is advantageous for police because federal forfeiture laws are more lenient than many state policies. This lets police keep up to 80 percent of assets they seize.

Law enforcement will continue to argue that civil asset forfeiture abuses are few and far between, but there have been multiple cases that prove abuses regularly happen. The fact is that since 9/11 police have conducted more than 61,000 seizures, taking more than $2.5 billion in cash alone from people who were never charged with a crime.

The validity of civil asset forfeiture was proved during prohibition, but today it’s simply out of control. The suspension of equitable-sharing is a good start and will hopefully deter senseless seizures, but we still have a long way to go. If police have used civil asset forfeiture as an excuse to take your money or property call Oklahoma City criminal defense lawyer Jacqui Ford. She has presented at several civil asset forfeiture reform hearings and has been a strong voice for the people. Oklahoma State Senator Kyle Loveless is pushing new legislation that would add much needed reform to the current Oklahoma civil asset forfeiture laws. Loveless, who represents district 45, was prompted to pursue reform laws after state audits found members of the DA’s office were using seized money to pay for rent and student loans.

Under current Oklahoma civil asset forfeiture laws, law enforcement can take and seize money and property without any sort of criminal charges. It is then the owner’s responsibility to prove in court that the money or property is not connected to criminal activity.

Scott Roland, Oklahoma County’s First Assistant District Attorney, opposes Loveless’s bill insisting that abuses are extremely rare. Roland claims police need to be able to seize money without charging people because drug cartels rarely travel with money and drugs at the same time. This makes it hard to seize money from a suspected drug trafficker who is traveling with drug money but no drugs.

“You have this large amount of money, which anyone in my business knows is a key indicator of illegal activity, and then you have them saying they don’t know anything about it, but it’s not theirs,” Roland says. “What would you have the police do? Pack it back up in the car in the hidden compartment and send it on back to the cartel? Or send it on back to al-Qaida or ISIS?”

Loveless is asking that whenever civil asset forfeiture happens, charges must be filed against the owner. The Department of Justice already adopted this practice earlier this year. These changes would create checks and balances in the criminal justice system that are absolutely necessary. On December 15th, 1791, the bill of rights was ratified. This list of 10 rights guarantees citizens certain unalienable rights. Among these guarantees is the right that no citizen can be subjected to unlawful search and seizure.

This is the 4th amendment and it’s full texts reads:

“The right of the people to be secure in their persons, houses, papers, and effects, against unreasonable searches and seizures, shall not be violated, and no warrants shall issue, but upon probable cause, supported by oath or affirmation, and particularly describing the place to be searched, and the persons or things to be seized.”

This is a strong assurance that the government cannot seize private property without probable cause and due process. Although every citizen has this right guaranteed, current legislation and policies are blurring the lines of what the government can and cannot take and when it can do so. When these lines are blurred it is known as civil asset forfeiture.

Don’t let the big term scare you; an experienced civil rights lawyer can easily handle these cases. Jacqui Ford recently spoke at the Oklahoma state capitol on the matter. In this address she detailed an account of how the state of Oklahoma seized more than $100,000 her client, and has retained the money two years after the criminal case was dismissed. The state was able to do this by claiming the money was in connected to drugs because the it was wrapped in vacuum sealed plastic bags. Despite the fact that there were no drugs found at the time of the seizure and that her client has no history of drug related criminal activity, the money was still taken and is still being held by the state. Ms. Ford is also claiming that the officer did not give her client due process because the he asked the client questions without informing him of his Miranda rights. The officer then used her client’s answers as probable cause to take and hold his money.

Ms. Ford is fighting hard to get this client the money that is rightfully his and she will fight hard for you. If you have had property or money seized by the state call Jacqui Ford (405-604-3200) to defend your constitutional right.