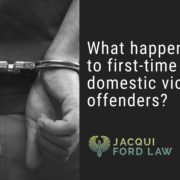 First-time domestic violence offenders are certainly viewed more favorably than those who have a history of domestic abuse.

A first offense is generally charged as a misdemeanor so long as there are no aggravating circumstances. In this case, the suspect could face up to one year in jail, a fine up to $5,000, or a combination of both jail time and a fine.

However, once an individual has been charged with one domestic abuse charge, the courts will view any repeat offenses as a pattern in the behavior and will act more harshly to protect the community from future domestic violence from the perpetrator.

From our team of dedicated Oklahoma criminal defense attorneys, here’s everything you need to know about a first-time domestic violence charge.

What to expect in a domestic violence legal proceeding in Oklahoma

The first step in the domestic violence legal process is that the accused person gets arrested.

At this point, the individual on trial will enter a plea.

It is very important to seek experienced criminal defense counsel before your arraignment. The decision you make about entering a plea is crucial to the future of your case. You can change your plea at any point in the process; however, it’s best to get it right from the start with how you enter your plea.

After the arraignment, the courts will issue the defendant new court dates for the rest of the legal proceedings. Your criminal defense attorney might engage in pre-trial negotiations during this time. Throughout this process, your lawyer will spend time learning the following for your case:

Your Oklahoma defense lawyer will need to investigate details about the case in their quest to build your defense. This can sometimes mean discussing the matter with any witnesses, including character witnesses.

Even if you’re not physically in a courtroom in front of a judge, your attorney will be working hard to build your criminal defense against the domestic violence charges to earn a favorable outcome or to get your case dismissed entirely.

How does a misdemeanor affect my record?

Misdemeanor convictions do not have the same severe consequences that felony charges do.

However, a misdemeanor still gives you a criminal record and could make it more difficult to prove your innocence in future criminal cases.

Similarly, if a job application asks if you’ve ever been convicted of a crime, you’ll need to answer yes and the misdemeanor will show on your record during the background check.

In some cases, an employer may only request criminal records back a set number of years. However, you don’t want to rely on that being the case.

There is no set time for which a misdemeanor will no longer show on your criminal record. It will remain there unless you petition to have it expunged or sealed.

Although most first-time domestic violence charges are only a misdemeanor, it is not something you want to just plead guilty to and accept. You should still hire an Oklahoma criminal defense attorney to defend you to avoid a conviction.

How you can help prepare a domestic violence defense with your lawyer?

As your lawyer works to build your domestic violence defense, they might look to you for additional details.

You should try to provide as much detail as possible that might help in favorable negotiations.

Jacqui Ford Law is a team of fierce defense attorneys. Whether your domestic abuse case is your first or subsequent offense, we’ll protect your rights. Contact us to schedule a free consultation to learn more about our criminal defense services.